The best political candidates have a plan for the future, creative solutions to problems, and something important to say. In short, all the best qualities of someone looking to create a set of quality lapel pins. The good news is that lapel pins and political campaigns go together like peanut butter and jelly. And we’ve got a long history of creating impressive

for customers on either side of the aisle.

In stock - Samples are randomized.

Send Us Your Ideas

Get an Online Proof

See How to Approve your Artwork

Crossing the Aisle in Style

When it comes to political pins on the campaign trail, the options for custom design don’t stop at flag pins. We have experience crafting all sorts of different gratitude pins for volunteers and campaign staff, presidential pins and political fundraising pins in every shape and size imaginable. No matter what type of design you need, we’ve got you covered.

Awareness ribbon pins usually take this familiar shape, making the color scheme the best way to help the design stand out from the crowd. The stars and stripes look incredible in ribbon form.

The thin blue line is a popular symbol representing the law enforcement community in our nation. Creating this flag pin in the shape of Texas was a fun way to add a unique sense of personality to the design.

Combining two different flags in the same flag pin design is a great way to show the partnership between two organizations. These pins are given to honored veterans.

This cloisonne flag pin includes both the American and British flags, as well as the FrontLine logo. Including national flags in a design is a great way to symbolize the partnership between nations.

Not all flag pins are designed to look like national flags. This Green Port flag pin was created for the Port of Long Beach and is used as something like an employee recognition award for environmental achievement.

Many Uses for Political Enamel Pins

The first thing to come to mind when you think about political lapel pins might be flag pins. Particularly during election season, you’d be hard pressed not to notice the number of flags stuck to the candidates’ lapels. But that’s not where the story of political pins ends.

Some of the design elements that are common to these types of pins change depending on the intended use of the pins themselves, but if you’re at all unsure of how to design your political lapel pins, you’ve come to the right place.

During a campaign, flag pins take prominence in order to appeal to the largest number of voters. But what are some of the options you see once the campaign trail comes to an end? Whether a candidate is victorious or not, the need to thank the people who helped them run a good race is imperative.

Pins for staffers after the race are more like employee appreciation pins than political pins. They’re a way to say thank you and show the people who regularly work long hours, and who are often volunteers, just how much their effort meant to you. As such, they aren’t as bound by some of the common design elements found in other political pins. National colors are still the most common, whether presented in soft enamel or cloisonne pins, but the message behind the pin can be completely different.

Pins worn by candidates typically have a simplicity or a level of decorum to their designs in order to not offend the voters. However, pins intended to be given to staff or sold to the public for fundraising initiatives aren’t as stuffy. Those pins are often personal or even funny in their designs. Funny political pins are common for fundraisers because it’s easier to sell comedy to your supporters than it might be to sell it to the public at large.

Funny political pins can be pins that bash the competition, or even pins that take a particular gaff from the candidate in question and turn it into a self-deprecating joke. Either option is equally valid since the candidate isn’t really intended to wear them. Much like campaign bumper stickers, the sky’s the limit.

People running for office are hardly ever seen without a lapel pin, but what if we told you that presidential candidates and other campaigners don’t account for even half of the political lapel pin sales during any given campaign season?

The truth is all of the political support materials you see, whether they be campaign buttons, bumper stickers, yard signs or any of the other hundred items used to show your support of a candidate, were more likely to be purchased by an independent party or a Political Action Committee in support of the candidate.

Anyone is free to create pins for a presidential election showing their support of whichever candidate. The pins are used for fundraising efforts with the proceeds being donated to the campaign. And the good news about that is they can look like and say anything you want. If you’re looking for an easy way to contribute to your candidate’s campaign without dedicating long hours volunteering or breaking the bank to make a financial contribution, selling custom political campaign pins is your best bet.

Whether you want to raise funds for your favorite candidate, thank staff for a job well done or even announce your own political campaign, we’ve got you covered. When you partner with Signature Pins, you gain the benefit of our years of experience, our 100% quality guarantee and our industry-leading turnaround time to ensure that your pins not only arrive well before your deadline, but also that they’re picture perfect the first time around.

Contact us today and see for yourself why we’re the best custom lapel pin company online. Our artists will have your first free proof of artwork delivered to you within 48 hours. From there, make as many changes to the design of your political pin as you need to get it perfect. With Signature Pins, you don’t spend a dime until you’re completely certain that the pin you’re seeing is the one you want to pin to your lapel.

Cloisonne Pin Pricing
(Up to 7 Colors)

We offer a variety of different optional attachments

Included with your Order

Included with your Order 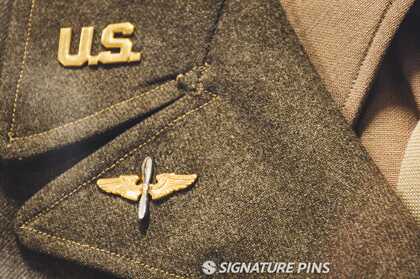 Get A Quote & Receive Free Artwork in 24 hours